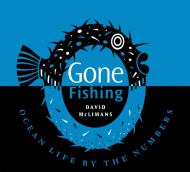 As a companion to his Caldecott Honor winner, Gone Wild: An Endangered Animal Alphabet , which was illustrated in red, black, and white, McLiman's ocean counting book uses a deep blue hue. He uses pencil, brush, India ink, and computer to present ocean creatures and their habitats from one to ten and back again, incorporating the numbers into the bodies of a variety of endangered and threatened sea mammals, birds, fish, and even one giant tube worm. The design is gorgeous. For the numbers one to ten, each creature is drawn in black and white against the blue background. Halfway through the book, when it's time to count down, the colors reverse, with animals painted in blue against a shiny black page. For the number 2, a humpback whale arches out of the water to form the curve of the number. Included on each page is a sidebar of information including the animal's class, habitat, aquatic regions, threats, and status. The humpback is listed as "vulnerable."

In the center of the book, there's a spread of "Ocean Facts by the Numbers," starting with 1 ("Less than 1 percent of water on Earth is freshwater.") and then by multiples of 100 up to 1,000,000,000,000. The final eight double-page spreads include "Diving Deeper," with a thumbnail illustration and a meaty paragraph about each creature; a page of statistics about "Our Blue Planet" (including this startling fact: "Less than 5 percent of all the oceans have been explored by humans."); and an excellent bibliography of websites and books. On the endpapers is a map of the world with each of the creatures drawn in its ocean or on its continent. This is one beautifully rendered package that can be used as the simplest of counting books, or as a math/science catalyst for children to research and draw new animals by the numbers.

Florian, Douglas. In the Swim: Poems and Paintings. Harcourt, 1997.