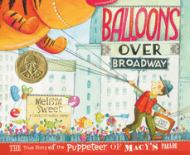 More than forty million (!) people worldwide watch the Macy's Parade each year, enchanted by the huge balloons that travel through New York City's canyons, nodding, smiling, and engaging the audience. Do any of us wonder who came up with the idea for those balloons?  Curious children can now have the answer: Tony Sarg, artist, puppeteer, inventor, created the giant balloons and changed the way we all greet the holiday season.

As a boy, Tony was determined to figure out how to make things move.  When his father asked him to feed the chickens very early every morning, Tony noodled the problem: how could he feed them without getting out of bed?  He spread feed outside the coop, and then, with pulleys and ropes, rigged up a way to open the chicken coop door from his bedroom.  When the alarm rang, he pulled the rope that opened the door, and the chickens emerged to eat their breakfast.  Tony went back to bed. His father was so impressed, he never asked Tony to do another chore.  And Tony's future was decided.  He would become a marionette man.

In London and then New York City, he made marionettes and performed shows for children.  The people at the "biggest store on earth" noticed his popularity and asked Tony to decorate their holiday windows with his marionettes. Tony took their request one step further and created mechanical marionettes that acted out nursery rhymes. People couldn't get enough of them. In 1924, he orchestrated Macy's first Thanksgiving Day parade. The successful event grew and grew, and soon Tony had to figure out how to make huge balloons that people could see from the back of the crowds.  His solution was clever and simple, and did the trick.  It still does.

Melissa Sweet captures the excitement of those first balloons sailing over Broadway in a two-page vertical spread that is a genuine show-stopper. Pages brimming over with detailed multi-media collage illustrations catch the spirit of Tony Sarg and give older picture-book readers much to look at and think about in this outstanding biography that mixes information and entertainment in equal measure.

Gerstein, Mordicai. The Man Who Walked Between The Towers. Roaring Brook Press, 2003.